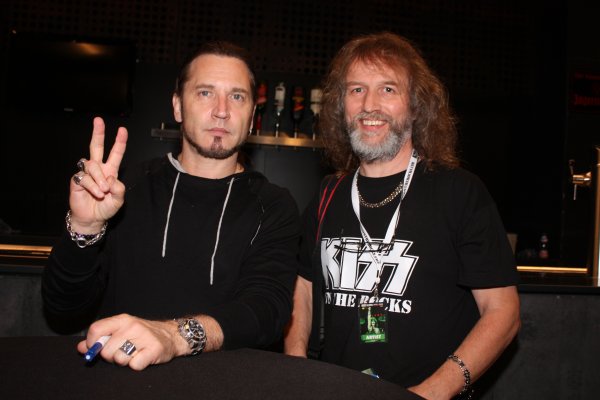 All for the Glory

Yesterday was one of the best days in our life.
Eric Singer and Kissonline came over to attend,
our Kiss expo in ATAK Enschede.
It was an amazing event!
get pictures and autographs, attend his Q&A,
and get the latest greatest merchandise from Kissonline.
Also, 2 halls of dealers offered a wide selection of vintage merchandise.
The evening was closed by a performance of KISS on the RockS.
We spend the Saturday with him in Amsterdam and had lots of fun.
During the meet & greets on Sunday Eric made sure he got to see all his fans.
Those who were lucky enough to get one of the 75 VIP passes
(those were sold out in 48 hours months ago!)
got all their items signed and got their pictures,
taken by our own photographer as well as their own cameras.
But Eric insisted to also meet with everybody else in the house.
The wait for the regular tickets was a little longer,
but still Eric signed at least 2 items each.
Not only did he want to make sure everyone was happy,
he also watched our show from backstage.
That got us a little nervous at first,
with the man himself watching over our shoulders from the side of the stage.
But it was so cool to perform with him there.
We started the show with our long time family member Bram,
who did the first 3 songs.
Bram will become a father again soon,
and his schedule won’t allow him to fit in the plans we have for 2012
(including a US tour of 5 cities! – more to come on that soon).
Bram insisted to do Eric’s All for the Glory,
and that was the last song he did with KISS on the RockS.
When leaving stage, Eric was there to great and congratulate him on the performance.
The best goodbye he could have every hoped for!
as the previous drummer for SSIK and KISS This.
Toni did an amazing job this evening,
and we look forward to a long lasting relationship with our new catman!
Check out the pictures.
and many requests to do another one soon.
We already have some plans lined up, and they will (again) amaze you.
Stay tuned here, sign up for our newsletter and we look forward seeing you soon.
We’ll be performing in England in December, but in January we’ll be back!
First off, the fans, who often drove a long way to attend this event.
Of course, Eric and Keith, with their crew of Justin, Sony and Matt,
who travelled even further.
Thanks for coming over this far, it means the world to us.

The 400+ fans that attended the event got to meet Eric,

Eric was amazing as always.

Eric actually hang out at the venue longer than scheduled.

And yes, as you have spotted, we have a new Catman!

Our new Catman is Toni, probably known by many of you,

We got many positive reactions from all who attended the expo,

We thank all involved.

A special thank you to ATAK, what a great venue, and what a fantastic bunch of people!